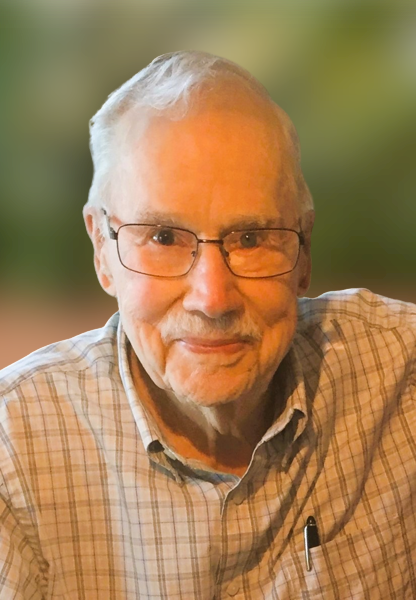 With great sadness, the family of Harold Laurence “Hap” Bettle announces his passing which occurred at Bobby’s Hospice on June 14, 2022. Born in Passekeag, NB on February 19, 1928, he was the son of the late Adolphus and Dorothy (Reid) Bettle.

After graduating from Sussex High School, Hap attended university, served in the RCMP and did survey work for the Province of NB before joining NBTel in 1950, retiring as Manager of Internal Audits and Security in 1988.

A resident of Hampton since 1965, Hap was involved in many areas of local governance, serving on the school board, Hampton Village Council, and the Planning Advisory Committee. He was a charter member of the Hampton Area Chamber of Commerce where he served as its first secretary, later as president and was granted honorary life membership. He chaired the Planning and Building Committees for both the Dr. VA Snow Centre and the Hampton United Church. Hap also served several terms as Director of the Atlantic Provinces Chamber of
Commerce and ten years on the Boards of the Kiwanis Nursing Home in Sussex and the Sussex Hospital.

After retirement from NBTel, Hap transitioned to managing his woodlot in Salt Springs supervising the harvest and regeneration of the woodland. He spent many hours single-handedly building his ”chalet”, developing trails and roads with his tractor, making maple syrup and simply walking through the woods.

Hap was an avid hunter and fisherman, learning these skills from his father-in-law Murray Hanlon. Hap was also an enthusiastic card player and spent many evenings with Shirley and friends playing cribbage and auction 45s at the Lower Norton Hall or at Glen and Greta’s in Titusville. For many years, Hap enjoyed bowling in a Saint John league and going with family and friends to horse racing tracks throughout the Maritimes.

Arrangements have been entrusted to Reid’s Funeral Home (506-832-5541), 1063 Main Street, Hampton, NB. A celebration of life will be held on Sunday, June 19, 2022 at 2:00 pm at Hampton United Church, 24 Robb Court. The family requests that masks be worn. Cremation has taken place and interment of ashes will take place in Titus Hill Cemetery.

Hap’s family extends sincere thanks for the excellent care provided to him by the staff at Bobby’s Hospice and by his family doctor, Michael Bone and staff. Donations in memory of Hap may be made to the Hampton-Piggs Peak Partnership or to the charity of the donor’s choice. Personal condolences to the family and charitable donations may be made through ReidsFH.com.

Share Your Memory of
Harold
Upload Your Memory View All Memories
Be the first to upload a memory!
Share A Memory