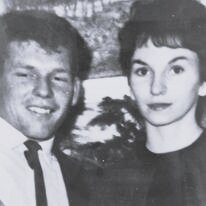 Celebration of Life for Cherie Watson

It is with great sadness that the family of Cherie Watson announce her death, which occurred on Sunday, January 23, 2022, at Concord Hall in Quispamsis, NB.  Born in London, England, on May 24, 1940, she was a daughter of the late Henry and Nellie (Nunn) Low. In addition to her parents, Cherie was predeceased by her loving husband Jack Donaldson Watson; brothers, Terry Low and Ian Low; and Sister, Jacqueline Davis.

Cherie's family was her greatest passion and love. She adored her family, creating many many sweaters and blankets for them 'to keep her hands busy' as she watched a movie, she would say.  She was well travelled and met her soul mate and love of her life, Jack Watson, while in the army, stationed in exotic Gibraltar.  Cherie loved to read and had a large collection of books, always on the prowl for a 'Catherine Cookson' book that she had not read. Cherie was employed as school secretary at Hampton Middle School for 28 years, a position she acquired shortly after immigrating to Canada, from England, in 1975.  She made many lifelong friends and was loved and respected by both students and staff alike.

Arrangements have been entrusted to Reid’s Funeral Home (506-832-5541), 1063 Main Street, Hampton, NB. A Celebration of Life will be held on Wednesday, June 1, 2022 at 11AM at the Hampton United Church, 24 Robb Court Hampton, NB. Donations in memory of Cherie may be made to Operation Smile Canada or the charity of the donor’s choice. Personal condolences to the family and donations may be made through ReidsFH.com

Share Your Memory of
Cherie
Upload Your Memory View All Memories
Be the first to upload a memory!
Share A Memory