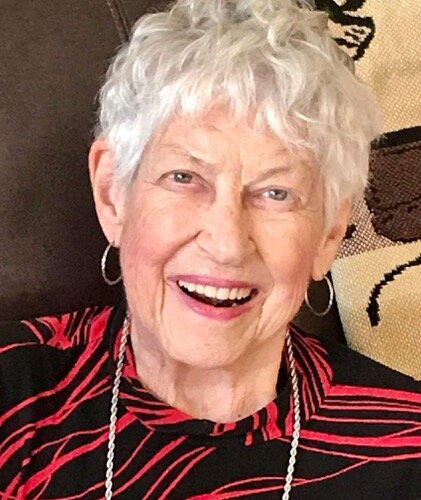 It is with great sadness that the family of Shirley Ann Corkum, age 85, announces her peaceful passing which occurred at the Saint John Regional Hospital, Friday, December 17, 2021. Originally from Milltown, NB, daughter of the late Milford (Mickey) Klein and the late Muriel (MacKenzie) Klein.

Shirley is survived by her husband, of 65 years, Lionel Corkum; her three daughters: Julie (Steve Ryan), Cathy Westbury (Paul) and Lynn Brett (Lorne); grandchildren: Kyle Westbury (Brittany) of Alberta and Meaghan Piscatelli (David) of Florida; great-grandchildren: Tymber Westbury and Elena Piscatelli. She will be missed by her many friends and cousins.

Shirley was a proud graduate of Mount Allison University (1955) where she was president of her class and met many lifelong friends. Following graduation, she moved to Halifax where she worked for Don Oland at Olands Brewery; met and married Lou and worked there until her children were born. She returned to work later in administrative positions, retiring from Clark Administrative Consultants in Saint John, NB as the office manager.

Shirley was always actively involved in her children's sports and organizations. She was a Brownie leader and loved her name, Snowy Owl. Shirley was also involved in local politics serving as the first female deputy Mayor of Quispamsis. She enjoyed working on the Quispamsis Recreation Association raising money for recreation in the town. Shirley and Lou enjoyed the many dances and events held in Quispam. In retirement Shirley and Lou spent much of the winter in Clearwater and Sebring Florida, golfing and swimming, activities that Shirley loved doing there and at home in Hampton in the summers. Shirley golfed with the ladies 9ers at the Hampton Golf Club and was a Red Hatter.

The family would like to thank the employees of KingsWay Care Home in Quispamsis for their loving care they gave Shirley for the last two years. Special thanks also to the nurses and doctors of the orthopaedic and palliative care units at the Saint John Regional Hospital.

Arrangements have been entrusted to Reid’s Funeral Home (506-832-5541) 1063 Main Street, Hampton, NB. At Shirley’s request there will be no service or visitation at this time. A private family interment will take place at a later date.

Donations in memory of Shirley may be made to the Kingsway Life Alliance Inc., 8 Squire Drive., Quispamsis, NB E2G 2A1 (506-847-1131) or to the charity of the donor’s choice. Personal condolences to the family and memorial donations may be made through: www.reidsfh.com