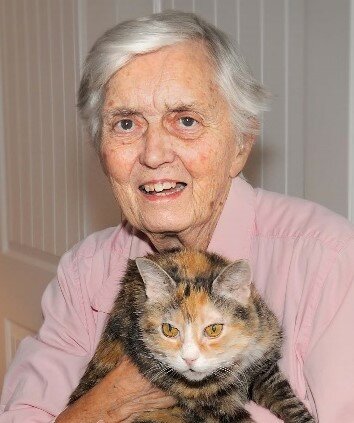 It is with much sadness that the family of Dorothy “Dar” Bacon announces her passing after a lengthy battle with Alzheimer’s, on December 8, 2021, at the Dr. V.A. Snow Centre with family at her side. Dorothy was born in Saint John on June 6, 1929, to Mary (DeMille) and Vincent Bacon. In addition to her parents, she was predeceased by her only sister Agnes (Bacon) and brother-in-law Leslie Wright, as well as her aunts, uncles and cousins. She is survived by Agnes’ children; nephews David (Trish), Brian (Susan), nieces Caryl (Phil) McAteer and Ann, as well as several grand nieces and nephews.

After winning her battle with rheumatic fever as a young child (before the days of penicillin) and graduating from Saint John Vocational School, Dorothy was awarded a Beaverbrook Scholarship and completed her teaching degree at UNB. Several years later, she went on to complete her Master’s Degree in Education. She began her career in a one room school house and ended teaching math for many years at Simond’s High School. Dorothy then left teaching at age 48 and moved to Hampton to care for her elderly aunts and an uncle.

During her teaching years, Dorothy enjoyed her many trips with good friends to places in Europe and the Caribbean. She also enjoyed classical music, going to plays, symphony concerts, and enjoyed visits with cousins George and Elizabeth DeMille over the years. Every Christmas holiday and the summer months were spent with her sister Agnes and “the kids”, travelling, camping and making wonderful memories. Among her many family roles she was our board game competitor, our playmate, our lifeguard, our sliding companion and our biggest fan. She was our treasured “Auntie Dar” (her sister was unable to say ‘Dorothy’ when she was little).

In later years, Dar gave selflessly of herself to caring for her elderly family members at home and tending to her gardens. She was also a quietly and devoutly religious person. Her love of cats and dogs (and any animal) led her to rescue and care for many furry friends along the way… she loved them all.

The family would like to thank the caregivers and the Dr. V.A. Snow Centre for their constant care during Dar’s final years.

Arrangements have been entrusted to Reid’s Funeral Home (506-832-5541), 1063 Main Street, Hampton, NB. A private family graveside service will take place at St. Paul’s Anglican Cemetery, Hampton, NB at a later date. Donations in memory of Dar may be made to the Saint John SPCA – Animal Rescue League, CARMA or to the charity of the donor’s choice. Personal condolences to the family and donations may be made through ReidsFH.com

Share Your Memory of
Dorothy
Upload Your Memory View All Memories
Be the first to upload a memory!
Share A Memory