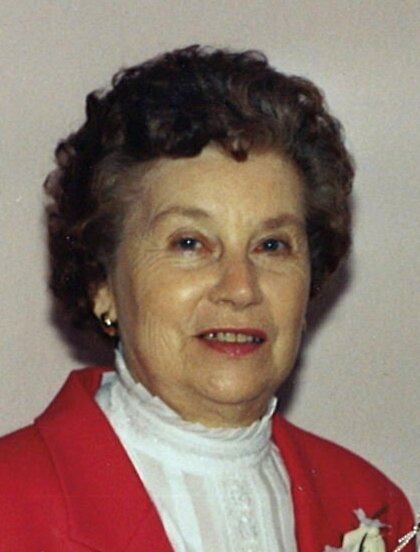 Get Directions
Monday
23
May

It is with great sadness that the family of Mary Lilias McAlary announce her passing which occurred on May 18, 2022, at Kiwanis Nursing Home, Sussex, New Brunswick. Born in Harris, New York, USA on January 26, 1926 she was the daughter of the late George and Gabriella (Moschini) Clarke.

At the young age of three, Mary moved to Saint John, NB with her grandparents, George and Lily Clarke. They raised her alongside her aunts: Sadie Carter, Mabel Clarke, Francis Todd and Inez McKinney. Mary become a Canadian citizen in 1988. After graduating from Saint John High, Mary went to business school and worked for Children’s Aide for a short time thereafter and then at the Unemployment Insurance Agency.

She married Hartley McAlary in June of 1946, and moved to Kingston, NB, to start their family. Together they had two children: Harry and Elizabeth. After raising her family, she studied and became an insurance agent, certified by the Insurance Institute of Canada, an accomplishment of which she was very proud.

Mary was a member of Kingston Trinity Church and taught Sunday School in her earlier years. She was an avid reader and loved the challenge of daily crossword puzzles.

The family wishes to thank the staff of Berwick Place, especially Heather McGrath for all the care and compassion given towards Mary. Also a special thank you to the staff of Kiwanis Nursing Home for their kindness shown during Mary’s stay there.

Donations in memory of Mary may be made to the charity of the donor’s choice. Personal condolences to the family and charitable donations may be made through ReidsFH.com

Share Your Memory of
Mary
Upload Your Memory View All Memories
Be the first to upload a memory!
Share A Memory