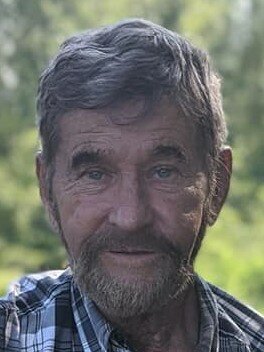 It is with great sadness that the family of Lawrence Joseph March announce his death, which occurred on Friday, December 31, 2021, at his daughter’s home in Salt Springs, New Brunswick. Born in Saint John, NB, on March 21, 1944, he was a son of the late Joseph and Florence (McGrath) March, raised and spent much of his life in Lepreau, NB.

His love for the Lord was the only thing that came close to his love for his family.  Dad was a humble man, a man of few words but very strong and handsome.  His father was a trapper and his mother filled his life with the love of the Lord.  His Sundays were spent around a full table of siblings enjoying rabbit stew made with fresh vegetables from the family garden.  Into the evening, his sisters would play the piano while his father squeezed the old accordion, tapping his foot to keep time.   The whole family would sing out gospel songs and praise the Lord with so much love in their hearts.

He was a man of few words, but the strength of ten men.  The tide is high and he has to make it to work before it starts to retreat.  Time and tide wait for no man, truer words were never spoken.  With a headlamp to light the salty mud flats and rubber boots up past his knees he heads out to feed his family.  I can still see my Dad carrying the 45 lb buckets of clams, 2 on each arm, the anguish on his face as his boots sank into the mud with each step.  At the end of each tide he would exchange his sore muscles and loss of sleep for whatever the daily rate was at the local fish factory.  He did it for the love of his family.

On any given day you could find Dad with us at the local garbage dump searching for discarded treasures.  We would climb into the pit of black bags, tearing each one open with the excitement of a Christmas present, not knowing what we’d find inside.  What I didn’t realize at the time was that the joy I experienced with each broken toy and treasure I found was a lesson in humility that my Dad was teaching me.  The pity in strangers eyes as they watched us in that dirty pit made me feel sorry for them, that they couldn’t experience the joy and freedom that we had found.

When he found time to be alone, he could be found with a pen in his hand and any pieces of scrap paper he could find.  He was a passionate man, full of love for people, and full of remorse for the sins of the world.  To see injustice happening anywhere to anyone would tear him apart mentally, and the only way he could express his feelings was to write.  I often read his documents, letters and stories and found myself in complete awe of how this man could be so versed in his writings.  How he could so thoroughly express himself and how articulate his thoughts could be.  He undoubtedly had a gift of written expression that no one could explain.

Pride is evil and the humble shall inherit the earth.  Those words are what Dad wanted to express to the world most of all.  If we can take anything from Dad’s teachings and from his life well lived, it is to always help one another and to love one another, we are all the same, we are all equal.  Without pride, we can all experience the purest of love.

Arrangements have been entrusted to Reid’s Funeral Home (506-832-5541), 1063 Main Street, Hampton, NB where services will be held privately. Donations in memory of Lawrence may be made to the charity of the donor’s choice. Personal condolences to the family and donations may be made through ReidsFH.com

Share Your Memory of
Lawrence
Upload Your Memory View All Memories
Be the first to upload a memory!
Share A Memory