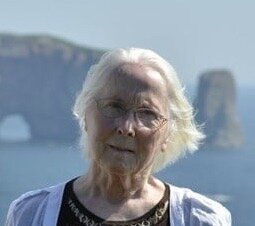 It is with great sadness that the family of Laura Wallace of Rothesay, NB, Canada announce her death on December 24, 2021. Born on August 12, 1933, in Easington, Co. Durham, England, she was a daughter of the late Lawrence and Norah Sample (nee Devine).

Laura was trained as a midwife and ward sister in Sunderland, England. She put her career aside in 1960 to become a wife and then a mother. She and Joe emigrated to New Zealand and spent many happy years there with their daughters before moving to Rothesay, Canada in 1978. She was a loving and caring Mum and always had time for her “girls”. She was a seamstress extraordinaire for many ballet productions and plays for the grandkids. She was also an avid gardener, knitter and “research assistant” for Dad’s cryptic crosswords. Whenever our family has a Sunday dinner we all think of her fondly, as her Yorkshire puddings were second to none. Conversations with Laura, over a “proper cup of tea”, will be greatly missed by her family.

Laura’s family would like to extend their heartfelt thanks for the wonderful care and support Mum received at Parkland in the Valley’s Embassy and Concorde Hall.

Arrangements have been entrusted to Reid’s Funeral Home (506-832-5541), 1063 Main Street, Hampton, NB, and will be held privately in the spring. Donations in memory of Laura may be made to the Parkinson Society of Canada or a charity of the donor’s choice.  Personal condolences to the family and donations may be made through ReidsFH.com

Share Your Memory of
Laura
Upload Your Memory View All Memories
Be the first to upload a memory!
Share A Memory