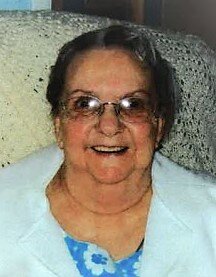 It is with great sadness that the family of Shirley June Fisher announce her death which occurred on Thursday, December 23, 2021 at the Saint John Regional Hospital, Saint John. Shirley was born in Humphrey’s Mill, England, on June 29, 1928, a daughter of the late James Henry and Clara (Falla) Firth.

Shirley is survived by her children: Sandra Ladouceur (William) of Windsor, ON, Michael Sharpe of Cambodia, Clarence Sharpe of Lakeside, NB, Pat McFarlane of Windsor, ON, and Robert Sharpe (Janet) of Windsor, ON; stepchildren: David Fisher, Terry Fisher, Murray Fisher, and Shirley (Joe) Dunn; along with many grandchildren, great-grandchildren, and extended family members. Shirley will also be missed by her Seventh Day Adventist Church families in Hampton and Barnesville.

In addition to her parents, she was predeceased by her husband, Wilkins Leroy Fisher; sons: Bill and James Sharpe; son-in-law, Bill McFarlane; brothers: James and Reginald Firth; and sisters: Sylvia Hone, Marjorie Landry, and Viola McNorton.

Arrangements have been entrusted to Reid’s Funeral Home (506-832-5541), 1063 Main Street, Hampton, NB, and will be held in the spring, followed by an interment at the Seventh Day Adventist Cemetery, Barnesville.

Donations in memory of Shirley may be made to the charity of the donors choice.  Personal condolences to the family and donations may be made through ReidsFH.com