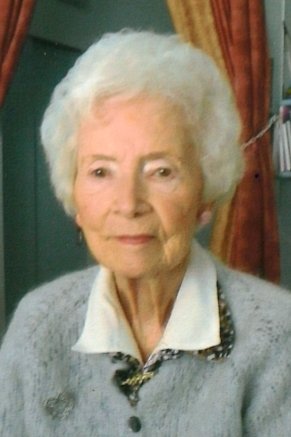 "Jesus said unto Her, "l am the resurrection and the life, he that believes on me, though he were dead, yet shall live" ...John 11:25

Jeannette was born on October 31, 1919 in Hamilton Ontario, to parents Jenny (Connell) and Edward Shedden, of Scotland. Her only sibling was brother Bruce Shedden who is now deceased along with his wife Janet and son Alyn.

Jeannette is lovingly remembered by daughters Lynda Fulkerson (Vancouver) and

Mom and Dad moved to Toronto following their marriage in 1941. Mom was a wonderful mother, wife and homemaker who also worked outside the home. She was first employed by Westinghouse, following high school, and later for Marshal Mattress Company Toronto, following her marriage. Later on, she worked for the North York Board of Education at the local elementary schools, in Don Mills, as a secretary.

Mom loved to garden, sew, dance and travel. She and dad were "Snow birds”, for many years in Panama City, Florida. After retirement, they lived part of the year in Campbellford, Ontario and later at the Sandy Cove retirement community near Barrie, until finally heading to New Brunswick to settle in Sussex in 1994. After Dads death in 1998, mom resided in Kings Manor for 10 years before moving to Shannex Embassy Hall Quispamsis, for two years. The final move was then taken to the nursing home, 2013.

Our family would like to thank all the staff of the Dr.V.A. Snow Centre for their loving attention, kindnesses and excellent care to our Mother over the almost 8 years she lived there. We also would like to mention our heartfelt thanks to her excellent personal care givers, Beverly Saunders, Sharon Robicheau, Sheila Scullion, Rita, Heather and Sylvia. Your dedication and kindness is not forgotten.

Arrangements have been entrusted to Reid’s Funeral Home (506-832-5541), 1063 Main Street, Hampton, NB. According to moms wishes, there will be no visitation or funeral service at this time.

However, a graveside memorial will be held later in the year at Upper Springfield Cemetery, Collina, for those who are able or wish to attend (to be announced). Personal condolences to the family, and memorial donations, may be made through ReidsFH.com

Mom will be greatly missed, but we await a future glad reunion, as we rest in the sure hope of the resurrection as promised, by Jesus, to all who believe in him.

Share Your Memory of
Jeannette
Upload Your Memory View All Memories
Be the first to upload a memory!
Share A Memory