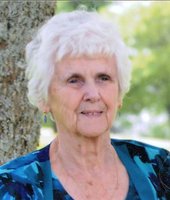 It is with great sadness that the family of Joyce Christine Lawrence announce her passing which occurred on November 27, 2020 at the Saint John Regional Hospital. Born in Lower Norton, NB on August 3, 1927 she was a daughter of the late George and Gladys (Hoyt) Ketchum.

Joyce was a devoted Wife, Mom, Gramma, and Great-Gramma (Gramma Joyce). She was married to the love of her life, Karl Walter Lawrence, for 65 years, and together they shared many wonderful memories with their family. Joyce enjoyed cooking for family gatherings and loved their summer picnics and camping time at Belleisle Bay. Some of her favourite hobbies included knitting, quilting, playing cards, and travelling with her sister, Pauline. She was also an active member of the Church of Ascension (Hampton) and the ACW.

In addition to her parents and loving husband Karl, Joyce was predeceased by her son, Clifford Lawrence; daughter-in-law, Anne Stephen; brother, Paul Ketchum; and sisters: Sandra Brown and Frances Reicker.

The family would like to thank the doctors and nurses of the SICU at the SJRH for the care and compassion that was shown to Joyce. In addition, they would like to acknowledge Joyce’s special friend, Irene, as well as her many lifelong friends who meant so much to her.

Arrangements have been entrusted to Reid’s Funeral Home (506-832-5541), 1063 Main Street, Hampton, NB. Due to COVID-19 restrictions, a funeral service and interment will be held at a later date.

In lieu of flowers, donations in memory of Joyce may be made to the Parkinson Society of Canada, Bobby’s Hospice, Church of the Ascension (Hampton), or to the charity of the donor’s choice. Personal condolences to the family and donations may be made through ReidsFH.com