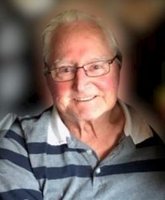 It is with great sadness that the family of Ivan Kazimer announce his passing on August 10, 2020 at the age of 81 years young. Ivan was born Oct 04, 1938 in Glace Bay NS to the late David and Agnes Kazimer. Ivan will be lovingly remembered by his children: Agnes Kazimer, Lawrence (Holly), Dennis (Joan) and Margaret (Shawn). Ivan will fondly be remembered by his Grandchildren: Dean, Anthony, Samantha, Jordan, MacKenzie, Aaron and Cassidy as well as several great grandchildren. Ivan was predeceased by his loving wife Rosalie; sister Lynda; brother Theodore and Grandchild Leroy. Ivan served his country by joining the Royal Canadian Navy in 1955 as what was known as a ‘Stoker’ and sailed on a number of ships over his 13 plus years before retiring from the Navy in 1969, upon which he accepted a job at Irving Oil in Saint John NB and moved his family to Hampton from Halifax NS. Ivan retired in 2002 after 33 years at Canaport. Ivan very much enjoyed being apart of his children’s and grandchildren’s growing lives where he gently provided guiding and loving advice. As said in the Navy, May fair Winds and Following seas be with you always! The family would like to extend profound gratitude to Bobby’s Hospice and the St. John Regional Hospital and the Doctor’s and nurses who cared for him. Arrangements have been entrusted to Reid’s Funeral Home (506-832-5541), 1063 Main Street, Hampton, NB, and due to COVID-19 restrictions and at the request of Ivan there will be no visitation. A private family interment will follow at St. Alphonsus Cemetery at a later date. In lieu of flowers, donations in memory of Ivan may be made to Bobby’s Hospice (http://www.hospicesj.ca/). Personal condolences to the family and donations may be made through ReidsFH.com