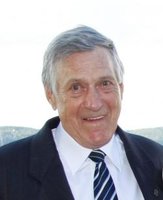 It is with great sadness that the family of James "Jim" Michael McNeil of Hampton, NB, announces his passing which occurred on April 30, 2020 at the Saint John Regional Hospital. Born on August 1, 1938, he was the son of the late Dan and Jennie (Burke) McNeil. Jim is survived by his loving wife of 60 years, Sandra (Beaton); his children: Stephen of Ontario, Michelle (Pat) of Ontario, and Patrick (Kim) of Hampton, New Brunswick; and his brother Albert (Effie) of Cape Breton, Nova Scotia. He is also survived by his grandchildren: Ayden, Avery and Alice of Hampton, NB; and his great-granddaughter Alanna, all of whom he loved very dearly. In addition to his parents, James was predeceased by his brother, Dan W. and sister, Joann. Jim joined the Armed Forces in August, 1957 until October, 1978. From 1978 until 1986 he was in the Civil Service as an Engineer 4, and from 1986 until 1996 he was a Contract Administrator for the Canadian Patrol Frigate Project. He obtained his Electrical Engineering Degree at the University of Alberta, and his Masters of Engineering Degree at the Royal Military College in Kingston, Ontario. Jim loved all sports (except basketball), and especially hockey and fishing! He also loved going to his cottage in Ontario and his trailer at Pirates Cove, NB. Arrangements have been entrusted to Reid’s Funeral Home (506-832-5541), 1063 Main Street, Hampton, NB and due to COVID-19 restrictions will be private. Memorial donations in memory of James may be made to Hampton PRO Kids or the charity of the donor’s choice. Personal condolences to the family and donations may be made through ReidsFH.com